The Flags of White Power

The NY Times Headline says,  Dylann Roof, Suspect in Charleston Shooting, Flew the Flags of White Power.  As if this is news.  Tut, tut.  Where could he have learned that?

Well, here’s the picture of the State Capitol of South Carolina: 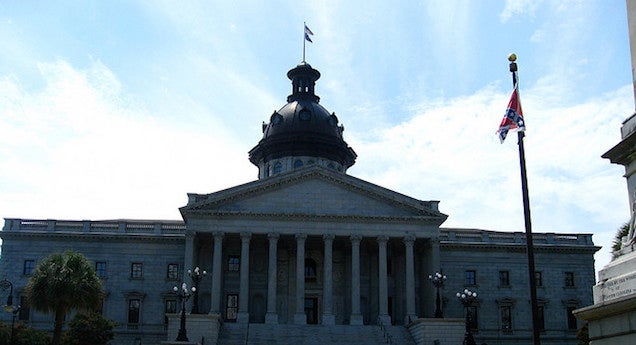 As all other flags in the state were flown at half-staff, the Confederate Flag, the Stars & Bars, remains flying at full-staff as required by South Carolina state law.

But for almost a hundred years after the Civil War was settled, no law in South Carolina existed to mandate the flying of this odious, racist symbol.  The law requiring this was passed in 1962, once their former property was starting to get so uppity as to expect the same rights as a citizen: voting, access to public education, being served in restaurants, and so on.

The measure to change the uniform of the state and local police departments to flowing white robes with matching hoods only failed by two votes.  Deficit hawks who were concerned about the cleaning bills, I guess.  While they were at it, I wonder if they considered another law, mandating the flying of this flag in all counties with at least one synagogue.

So.  We ask ourselves as if we did not know, as if we cared: wherever did Dylann Roof get the idea to fly the flags of white power?